Story on the Honesty of a Rickshaw Puller

The honesty of a Rickshaw Puller Story: Abdul Karim is a rickshaw-puller. He is very poor. Every day he has to work hard to maintain his family. One day while he was pulling a rickshaw, a gentleman got on his rickshaw. The man reached the destination and paid him the fare. But at the time of putting his wallet into his pocket, it dropped inside the rickshaw. The man went away. Then Karim discovered the wallet in his rickshaw. He at once understood that the wallet might be his previous passenger’s. He thought that the man was, no doubt, to get into the office.

Abdul Karim ran to the office keeping his rickshaw before a shop, requesting the shopkeeper to watch it. He was looking for the man. Then he saw the man inside the office. He stretched his hand with the purse towards the man. The man put his hand into his pocket but found nothing. He realized the accident and became pleased with Abdul Karim. The man wanted to give some money to him, but Abdul Karim refused. He said, “If I have done any benefit to you, God will award me.”

Moral of the story: Honesty is the best policy.

Story on The Reward of an Honest Rickshaw Puller

The Reward of an Honest Rickshaw Puller Story; Abdur Rahim is a rickshaw puller. He is very poor. Every day he has to work hard to maintain his farmly. One day while he was pulling a rickshaw, a gentleman got on his rickshaw. The man reached the destination and paid him the fare. But at the time of putting his purse into his pocket, it dropped inside the rickshaw. The man went away. Abdur Rahim wanted to take rest for a while and went to a quiet place.

Suddenly he saw a purse on his rickshaw. Being confused about what to do, he took it to his house. At home, he opened the purse and found twenty thousand tk inside the purse. He showed his wife Jnrina the purse. She told him to keep the taka for themselves. But the rickshaw puller did not agree with his wife. He wanted to find out the person who dropped the purse. But his wife insisted on her husband for keeping the money for themselves. She pointed out logically on behalf of using the money for themselves. She even began to quarrel with her husband on the issue.

But the ricksha puller was honest. He paid no heed to his wife’s argument. He thought if he returned the money to the owner of the purse, he would reward him some money. So he found out the address of the owner and returned the money to him. The owner of the purse became very pleased. He then seemed to be overwhelmed with the pleasure of getting back money rather than expressing gratitude to the rickshaw puller.

A Lucky Rickshaw Puller Story; Kashem is a poor rickshaw puller in Dhaka. Every day he drives his rickshaw to different areas of the Dhaka city. One day he saw some people selling lottery tickets enticing the passers-by. Kashem felt tempted and bought a ticket. He knew the date of the draw. He was waiting eagerly for the day. Then the much-awaited day came and he purchased a daily newspaper and went to his slum to check his number on the sly. He was very excited as dream peeped into his heart unconsciously.

He took out his ticket from a torn bag agilely. First, he checked his own number and then looked on the paper to find his number out. To his utter surprise, he found his number at the first prize place. He revised, revised, and revised. But he could not believe his own eyes. What a surprise! He is the winner of the first prize that means he is the owner of 50 lakh taka. He thought to himself. And he felt shouting but he did not do so. He told nothing to anyone even to his wife. Kashem on the sly communicated with the concerned authorities and got the money within a short time.

In the meantime, his name was published in the newspaper as the first prize winner of the lottery. He told his illuminates to spend a good portion of the welfare of them. He deposited half of the amount in a bank and with another half, he bought land and built a house there. Again he also gave his slum-mates some loans so that they might start a co-operative business. He himself also joined the business and their slums became a solvent one. Thus a lottery changes the fate of some slum dwellers. 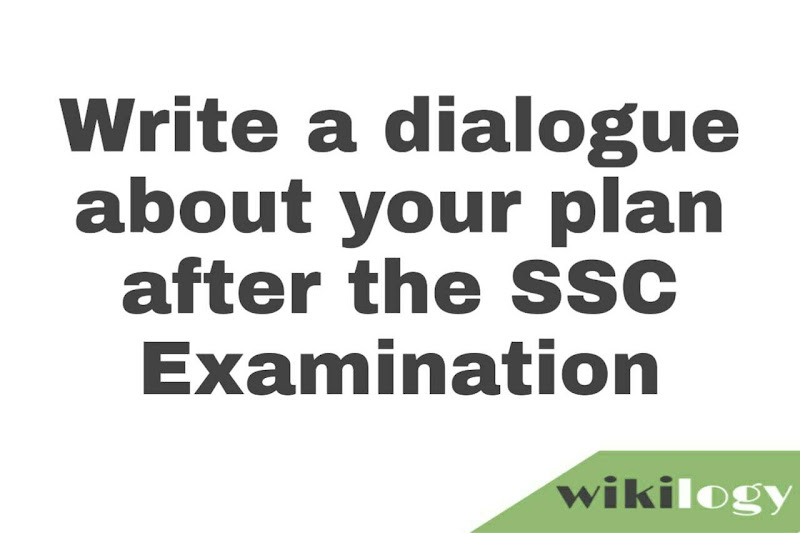 Write a dialogue about your plan after the SSC Examination

How to Take a Screenshot in Samsung Galaxy S8 Active : Capture SS

How to Take a Screenshot in Samsung Galaxy C8 : Capture SS